PART TWO OF THE GATORMEN SHOWCASE

A force in Warmachine and Hordes is not just made up of characters, regiments and big beasties like Warjacks and Warbeasts, but includes odd solo pieces - a unit of one, or a character(s) not powerful enough to be classed as a Warcaster or Warlock themselves. These "Solos" are very interesting pieces, and though the Blindwater Congregation only have a small number, they're very cool. Here I will show the three I have painted so far...


Witch Doctor
Each witch doctor is a powerful mystic who lives and breathes the foul necromantic arts that are his birthright. Life and death are two edges of the same bloody knife to the witch doctor, who often sees his allies as nothing more than tools of battle to be moved between those two states as required. Amid the morass of combat he gathers the vile totems required to power his spells, tearing the fleshy trophies from the carcasses of vanquished foes. Raising his sacral blade aloft, the witch doctor utters sibilant incantations that impel the huge beasts he control in a wave of scaled death.

The Witch Doctor was a chance to paint another character, with some interesting vials, bottles and festishes adorning his ragged cloaks. I particularly like the snake wrapped around his arm, and the effect achieved on the mysterious bottles tied to his waist. 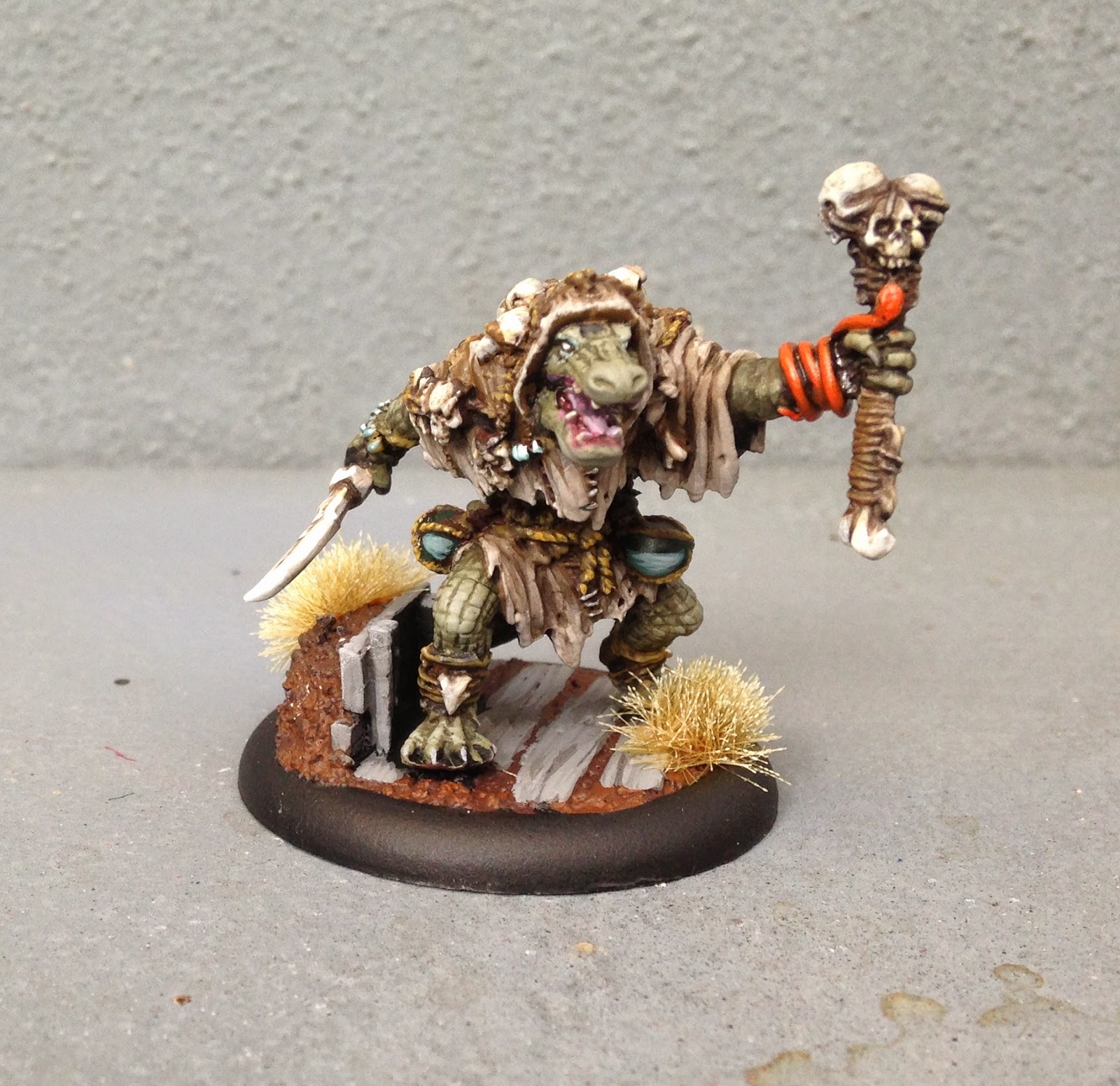 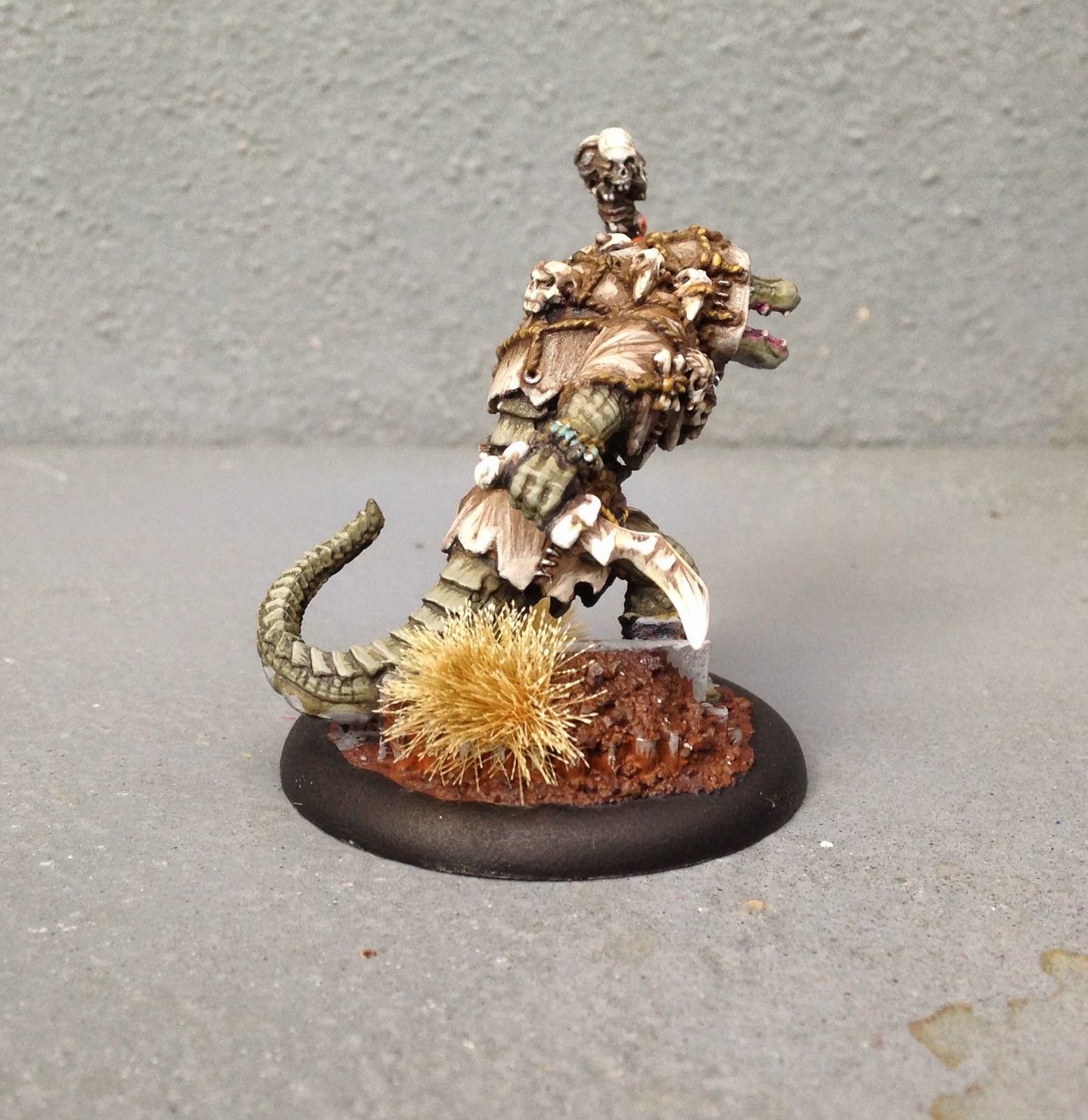 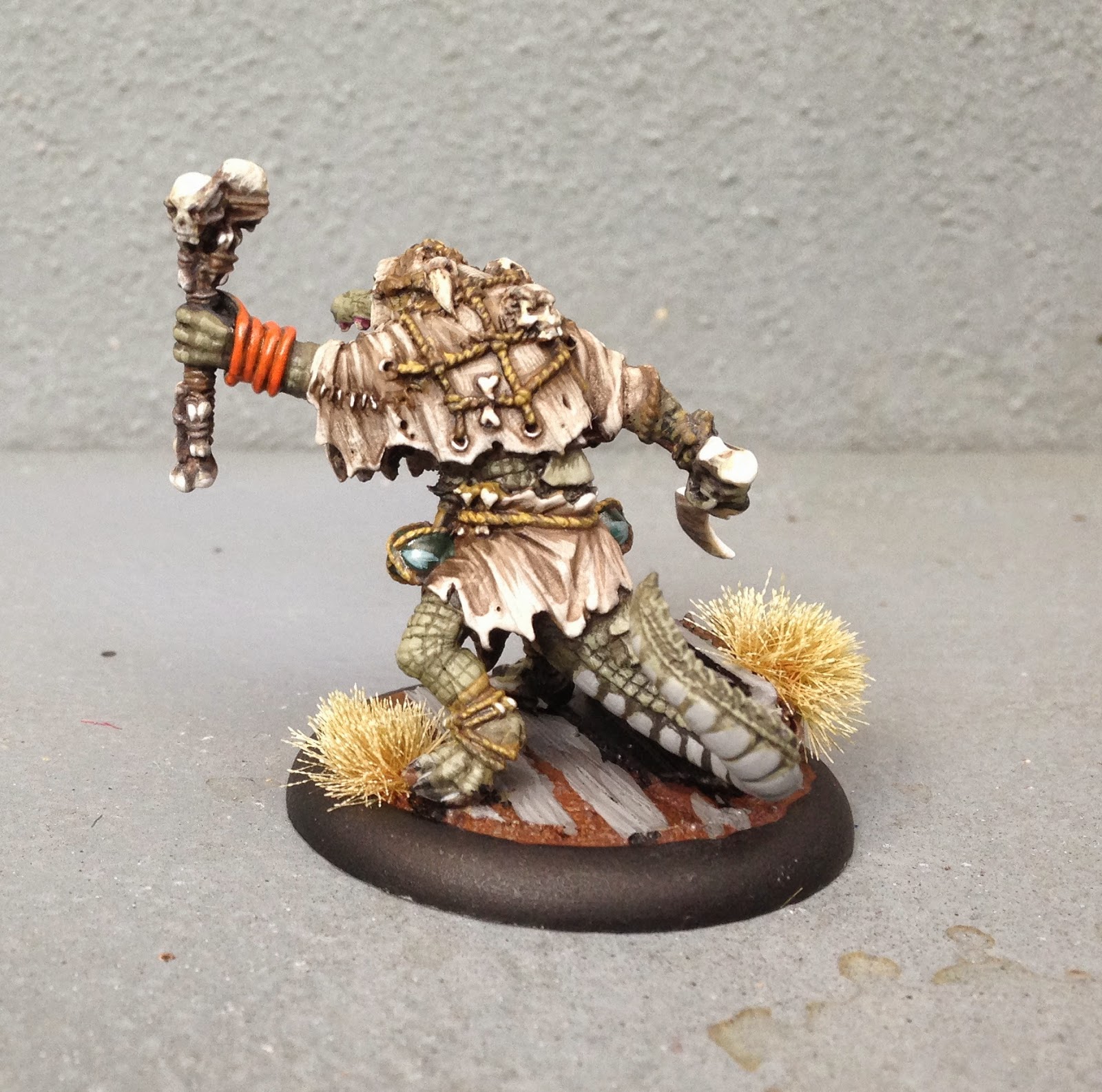 Croak Hunter
Some few anuras, a frog-like race commonly called “croaks” for their distinctive throaty calls, have made their way from the Shattered Spine Islands to chase both prey and adventure. The scouts and explorers known as hunters have developed a strong relationship with the gatormen of the Blindwater Congregation and will not hesitate to take up arms alongside these newfound allies. Croak hunters stalk their enemies from hidden positions before attacking them with spears dipped in deadly mixtures of natural poisons, including the toxins secreted by their own skin.

The Croak Hunter is one my favourite models in the Gatorman range - a crazy frog creature dressed in shells and wielding poison spears. It was fun to paint something so bright! 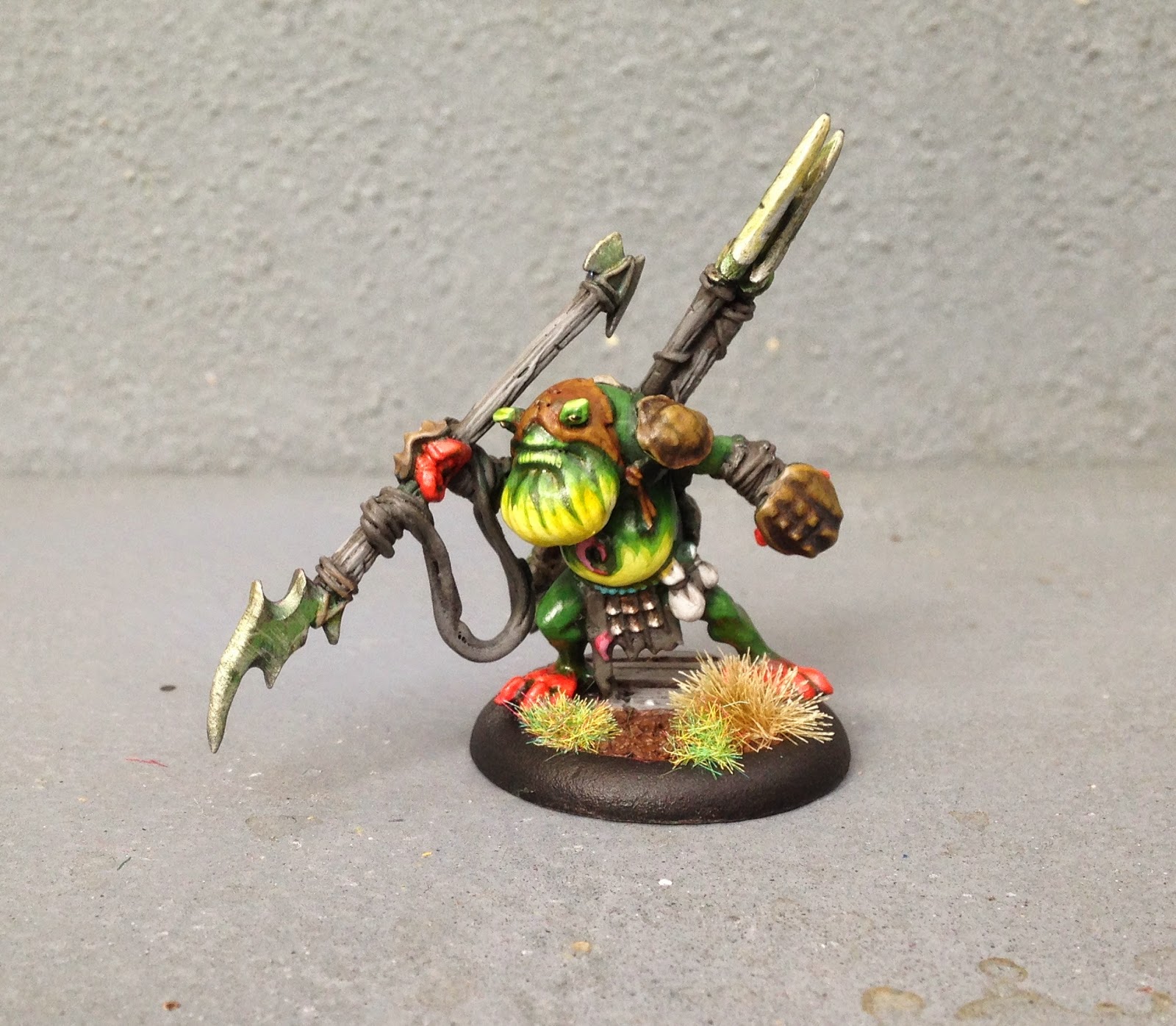 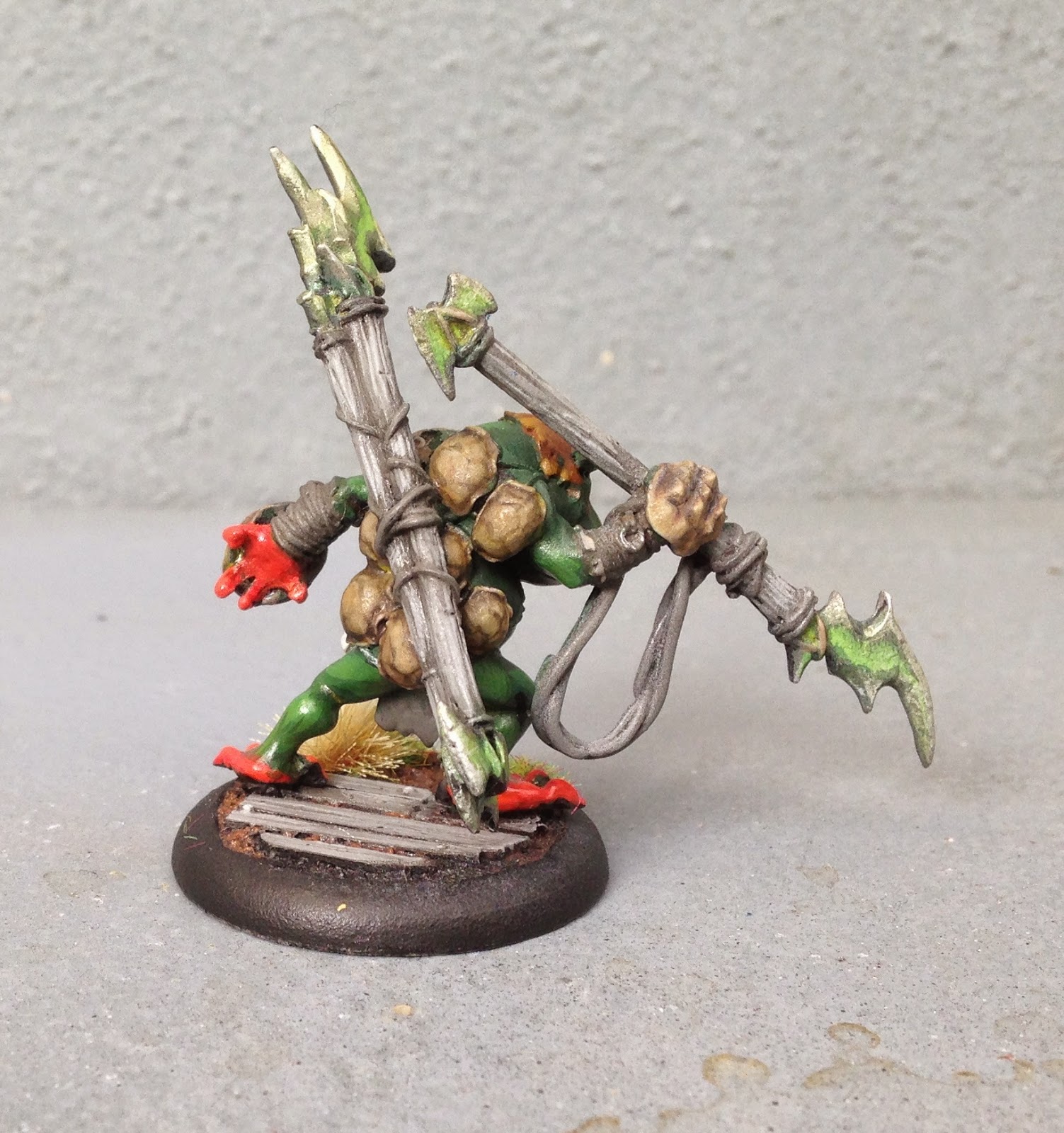 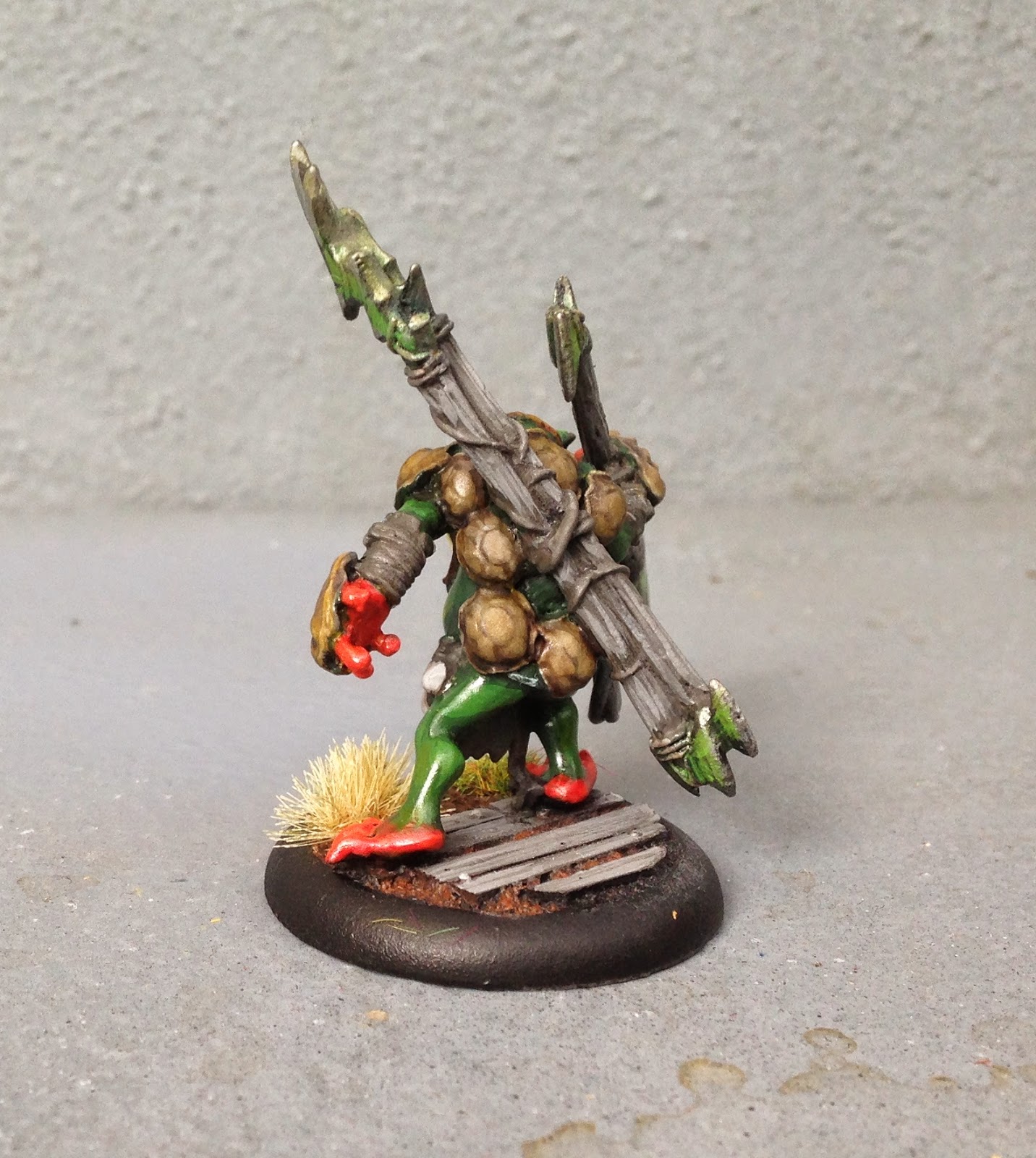 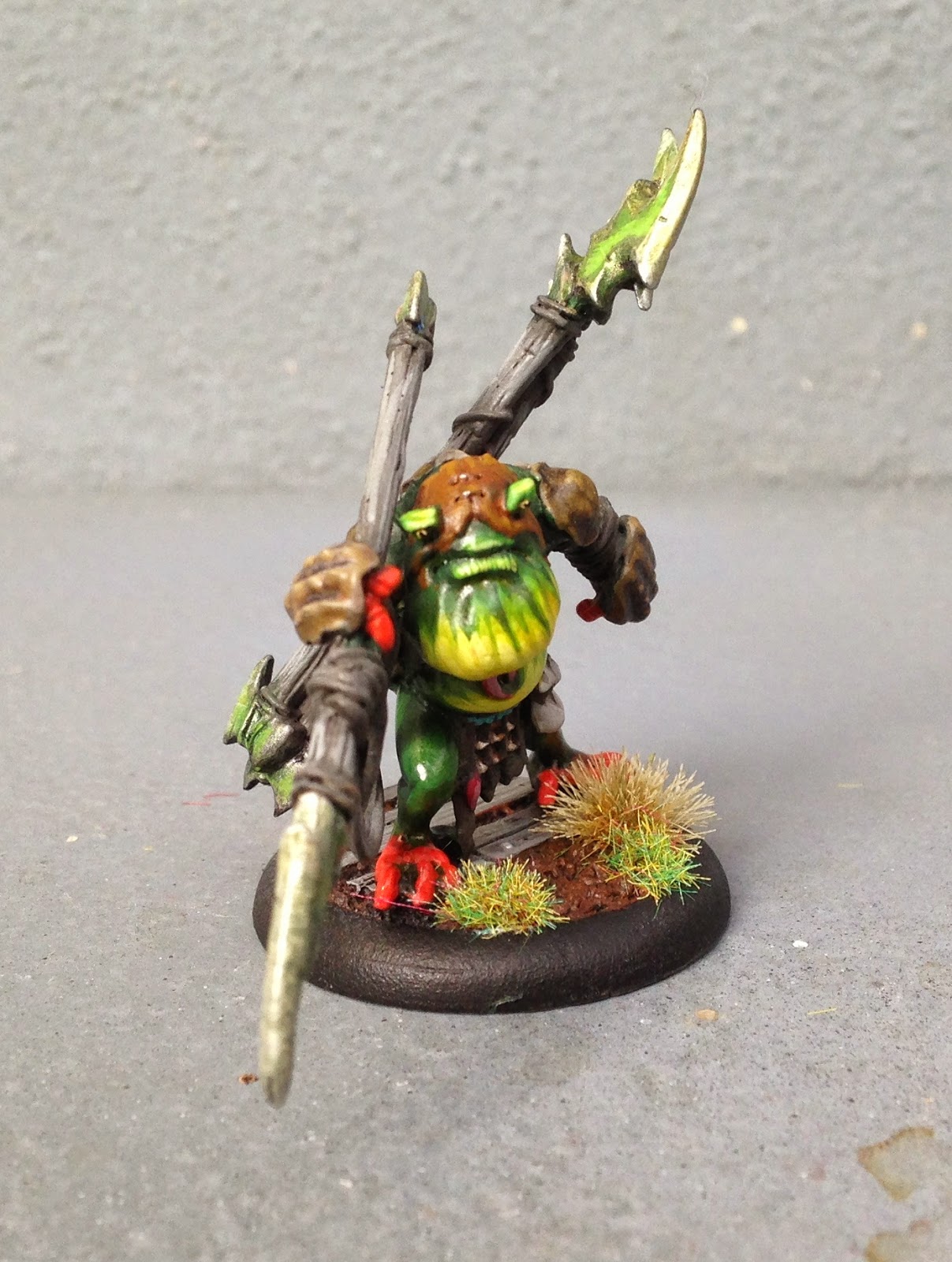 Wrong Eye is a legend among the Gatormen, known even among the predators for his odd mannerisms and unpredictability.
Snapjaw was infamous in its own right years before Wrong Eye bonded with it. Now the two terrorize the battlefield (and small settlements) together.

The proper Voodoo-priest, this strange character and his lovely pet are great fun - I love the big coat with tophat on Wrong Eye, his straw-dolls and bottle of... something. Snapjaw is equally cool, as fearsome as the Wrastler but with a unique look that makes him something special. I enjoyed painting the "Wrong Eye" a glowing yellow, a colour not seen much across the rest of the force. 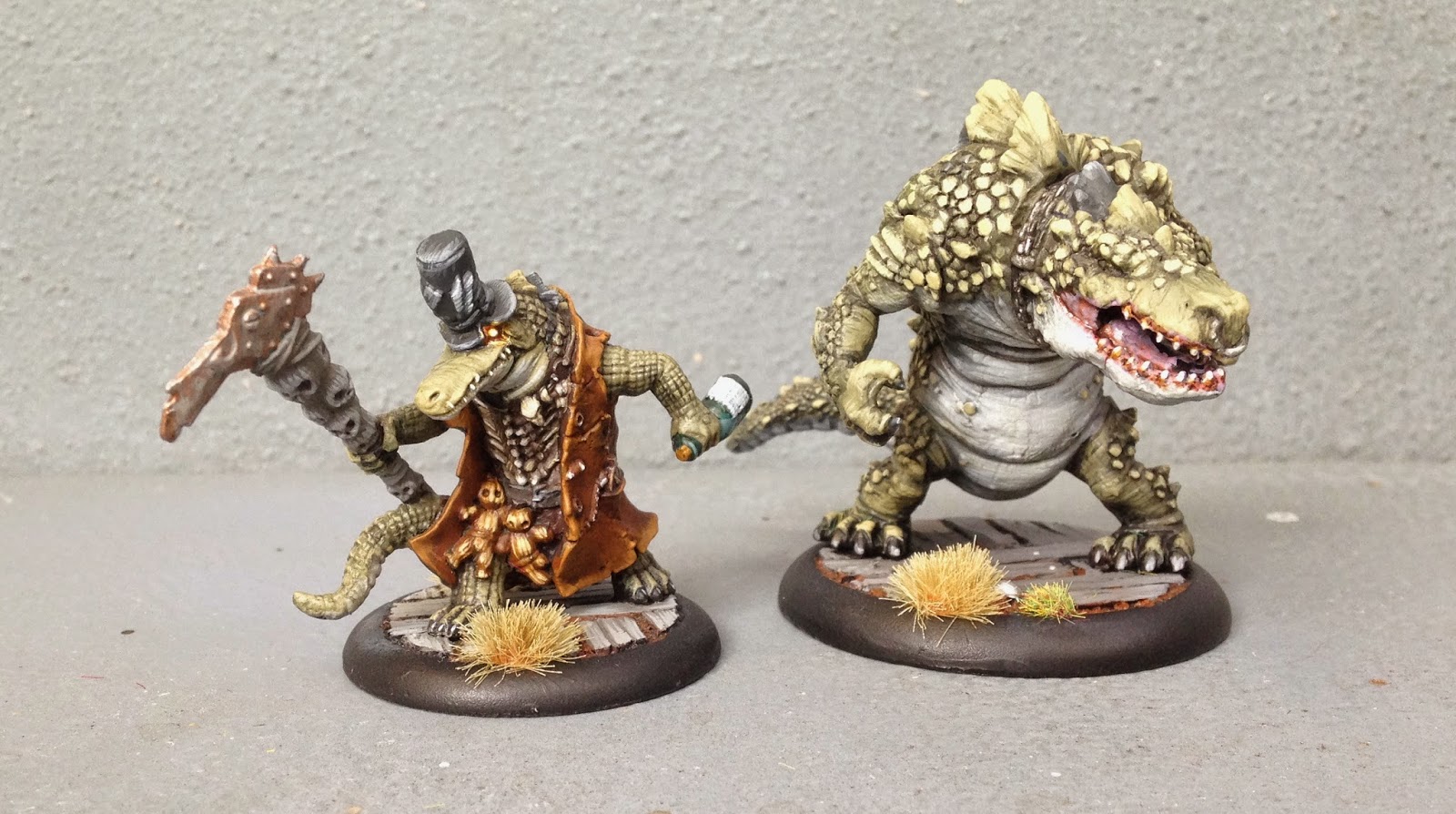 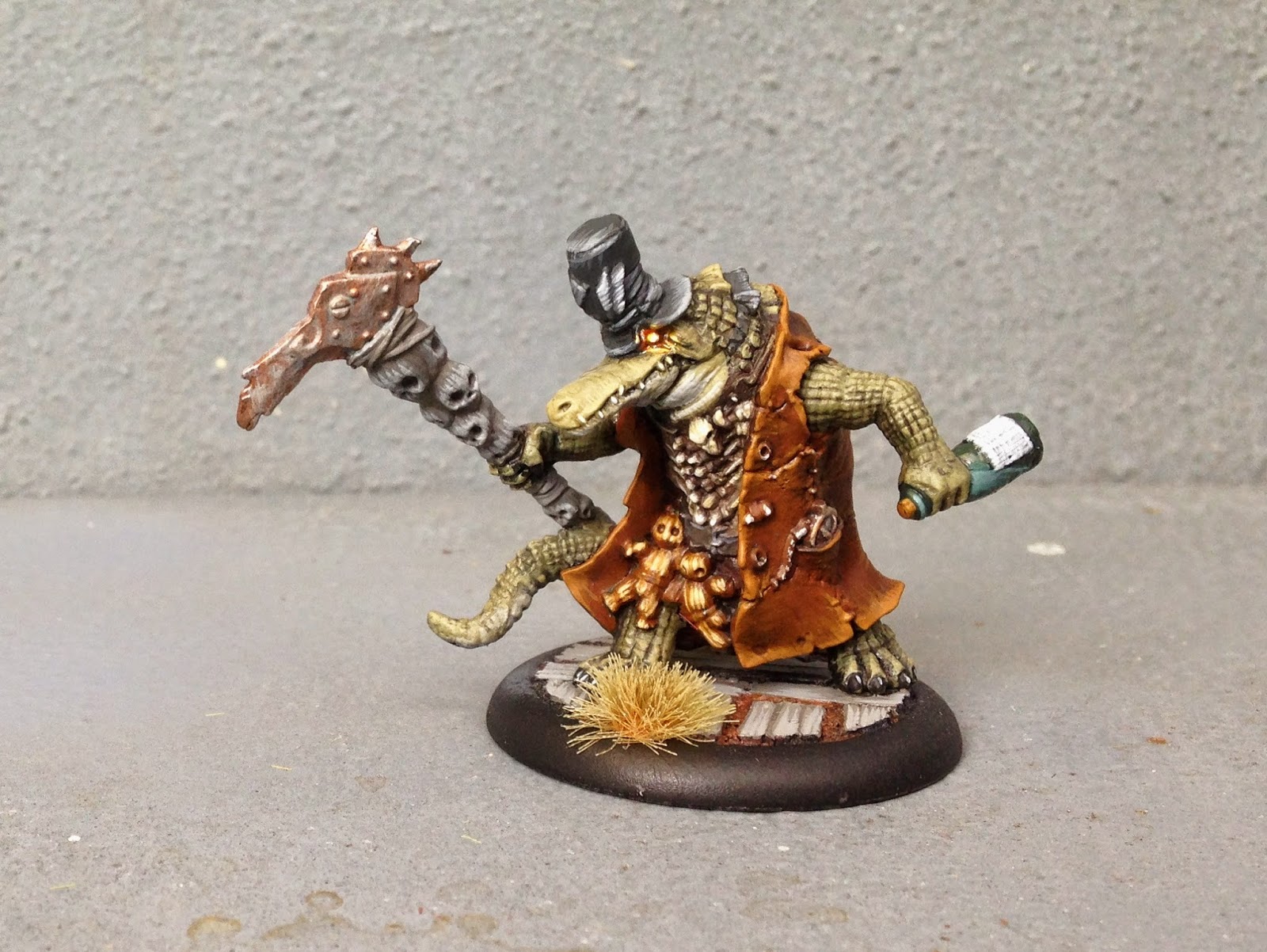 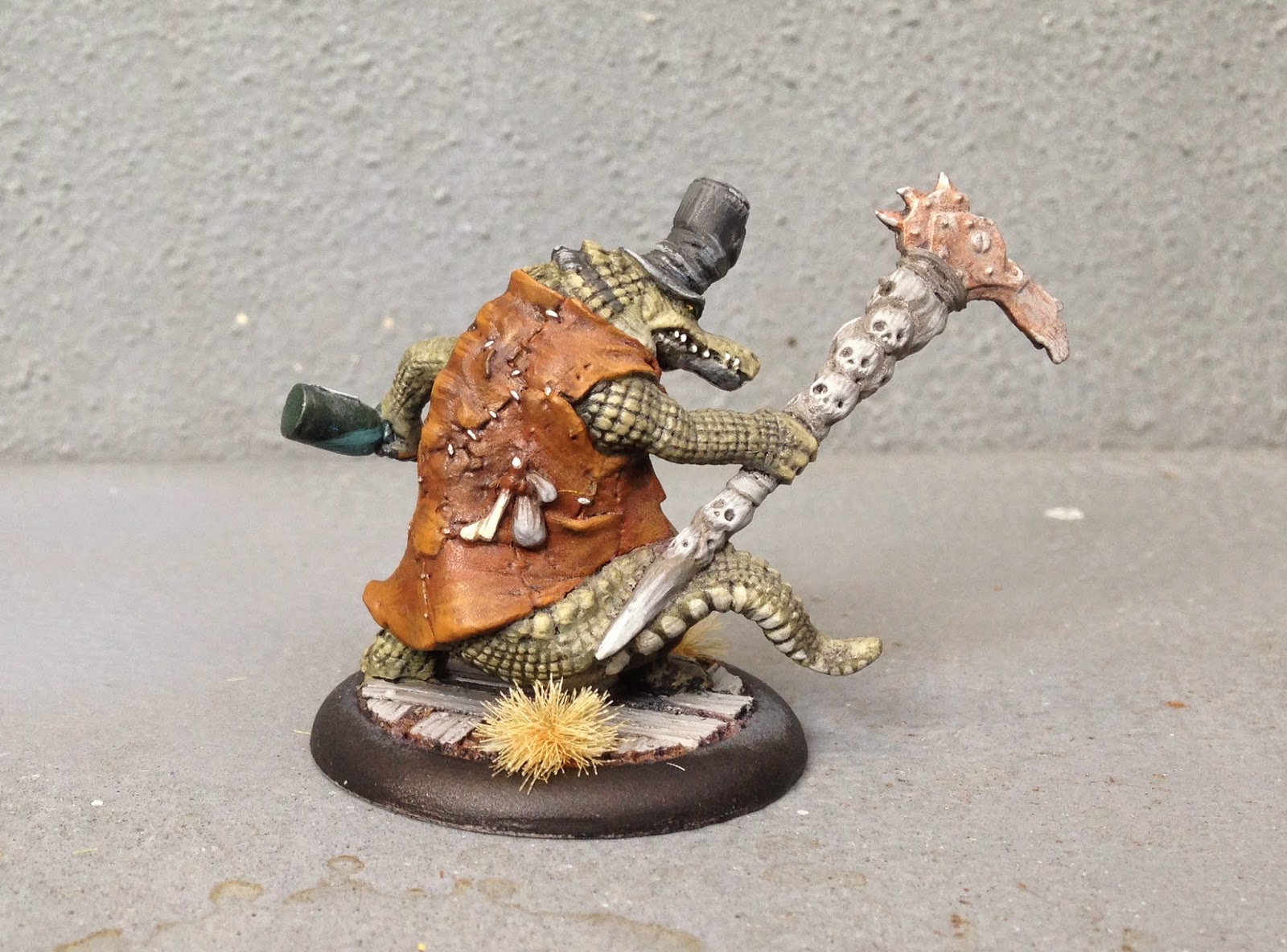 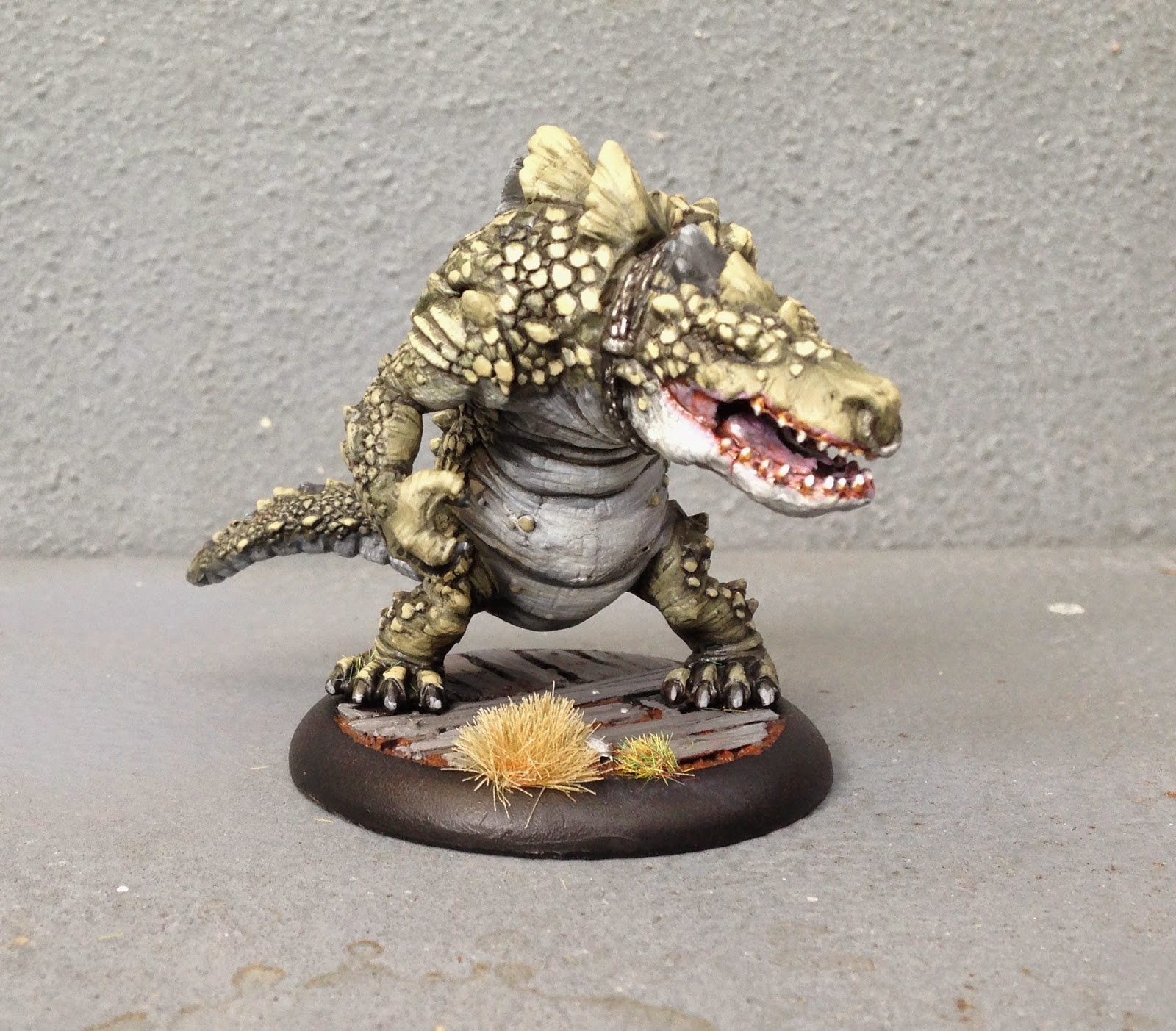 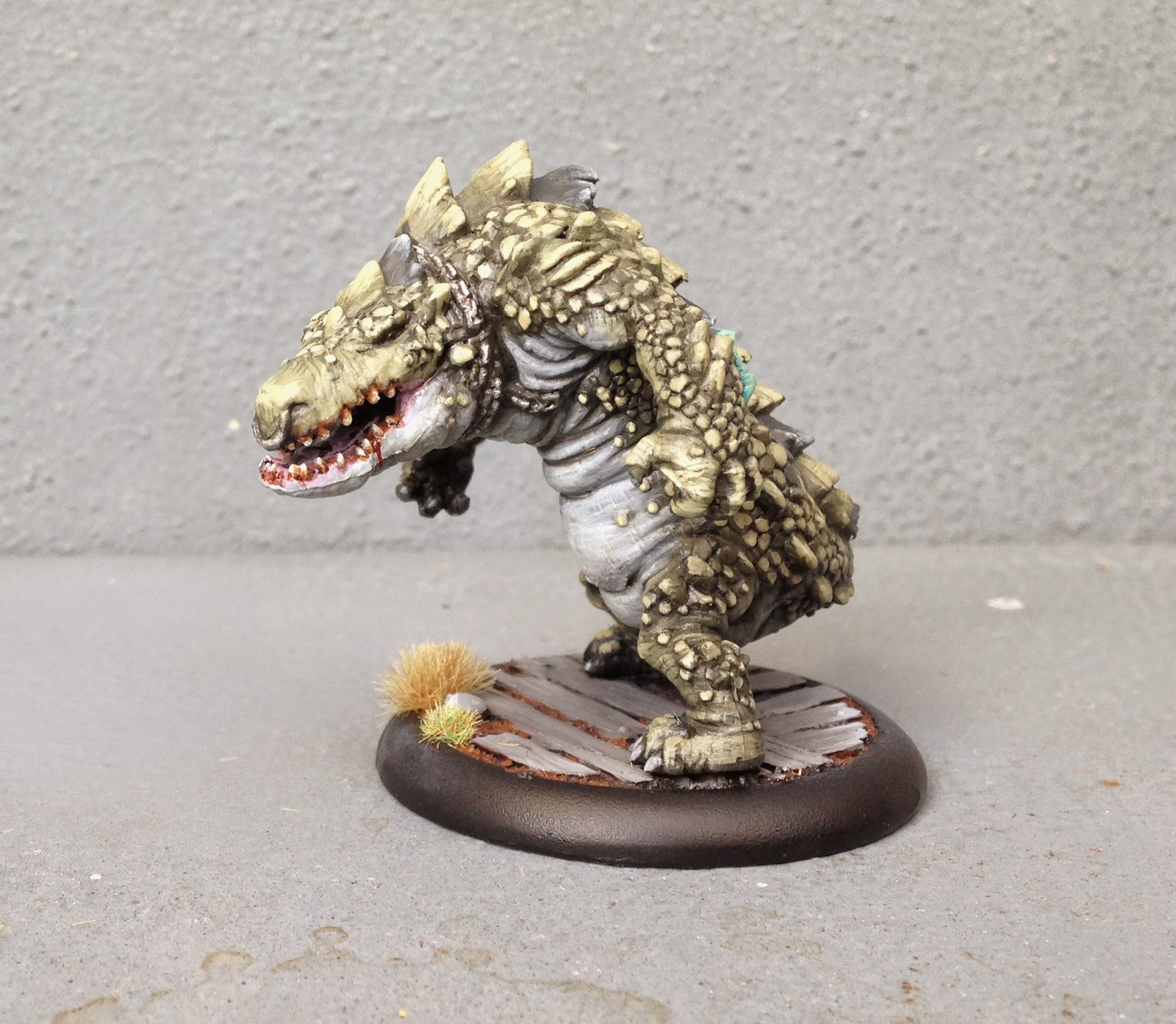 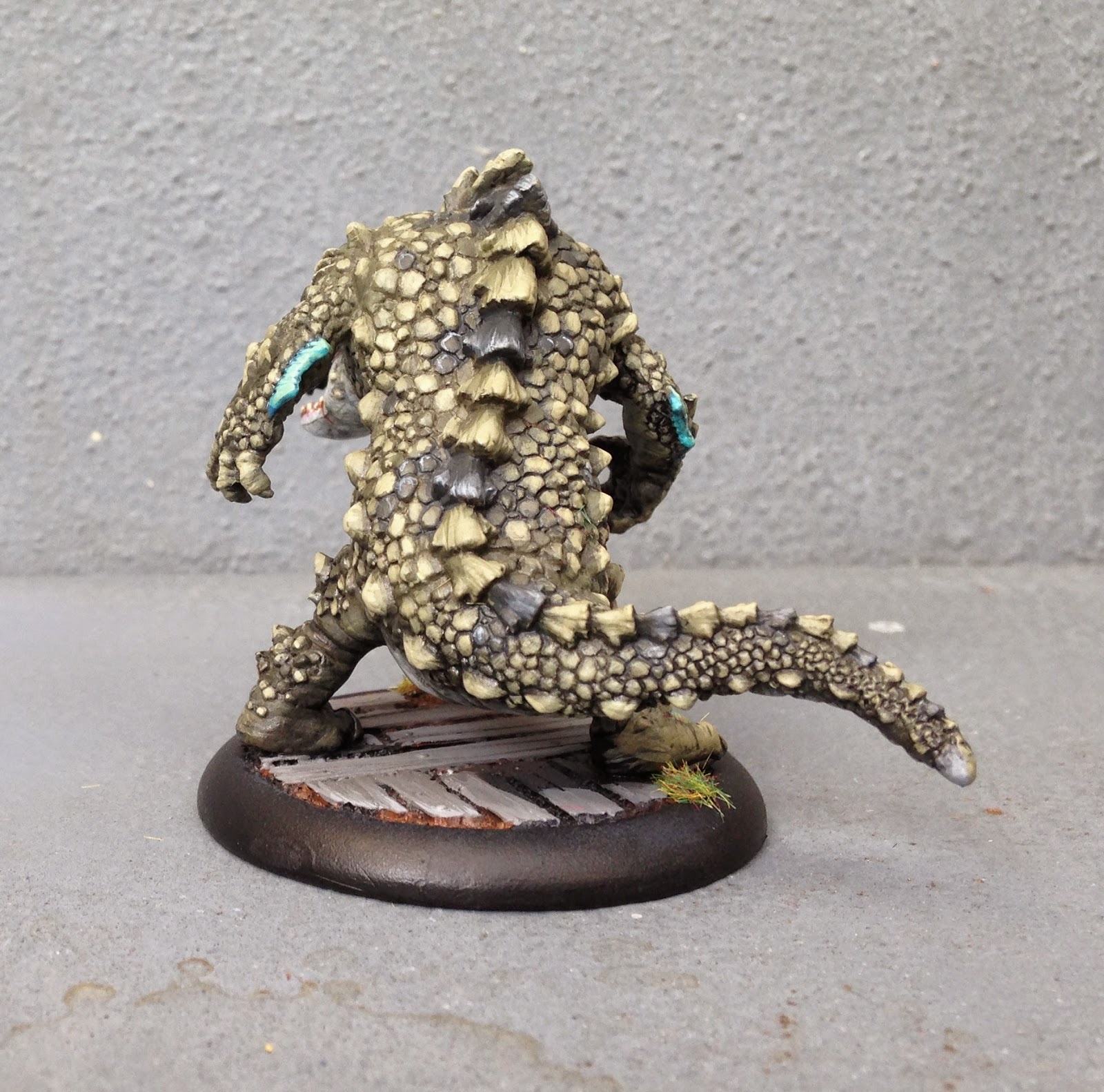 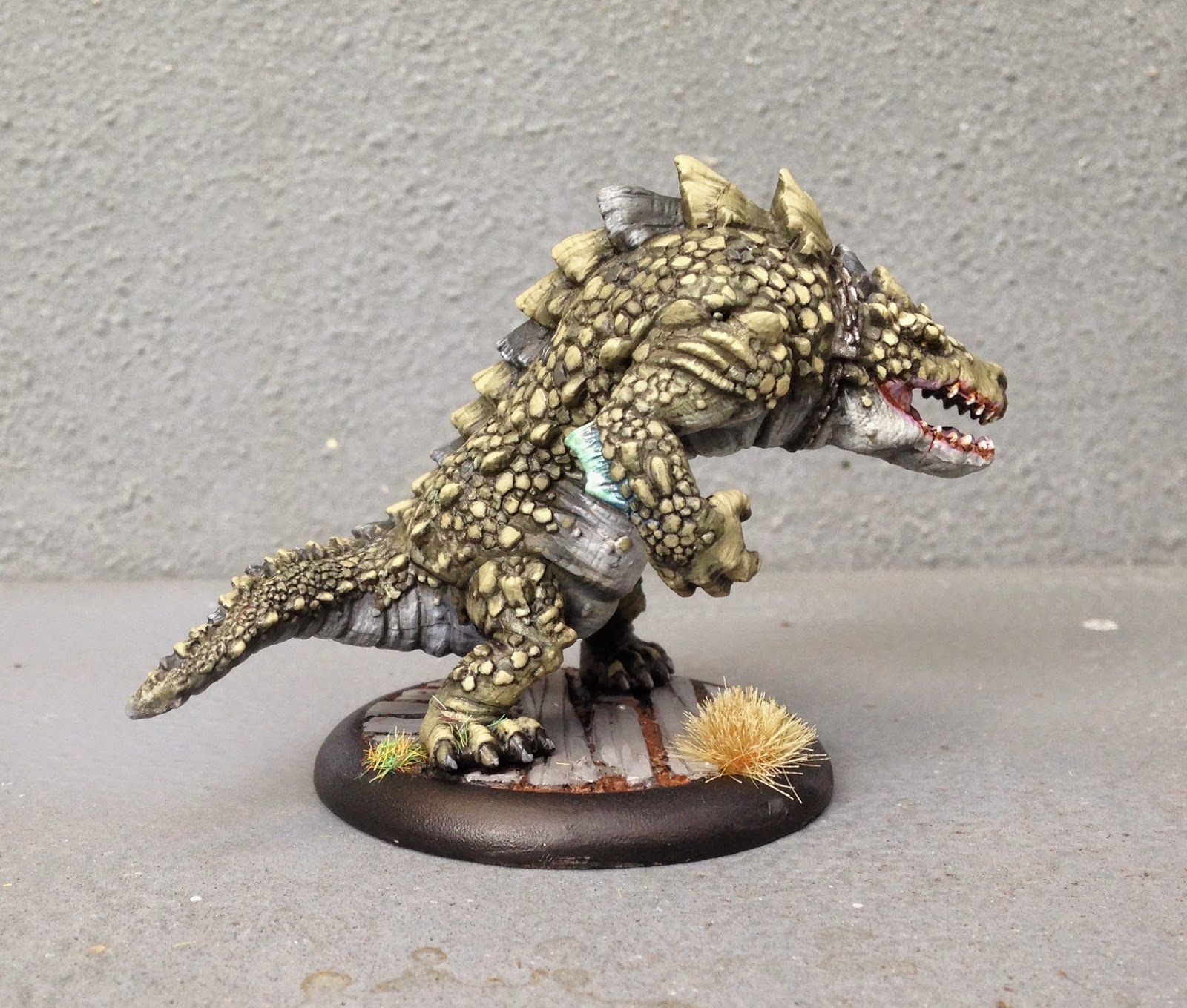 Gatormen Posse
The tribespeople of the Blindwater Congregation, these are the Gatormen foot-soldiers - tireless, ever-patient and ever-hungry. Led by the Bokor, a shaman of the tribe, they are vicious killers more than a match for any man or man-sized creature.

The original metal Gatormen Posse, these characterful models are sadly limited in poses, so for the second Posse I modelled them as Undead, risen from the grave to keep fighting Bloody Barnabas' crusade. Glowing blue eyes, open wounds and magical candles on their heads link them aesthetically with Maelok the Dreadbound, Undead Warlock of the Gatormen 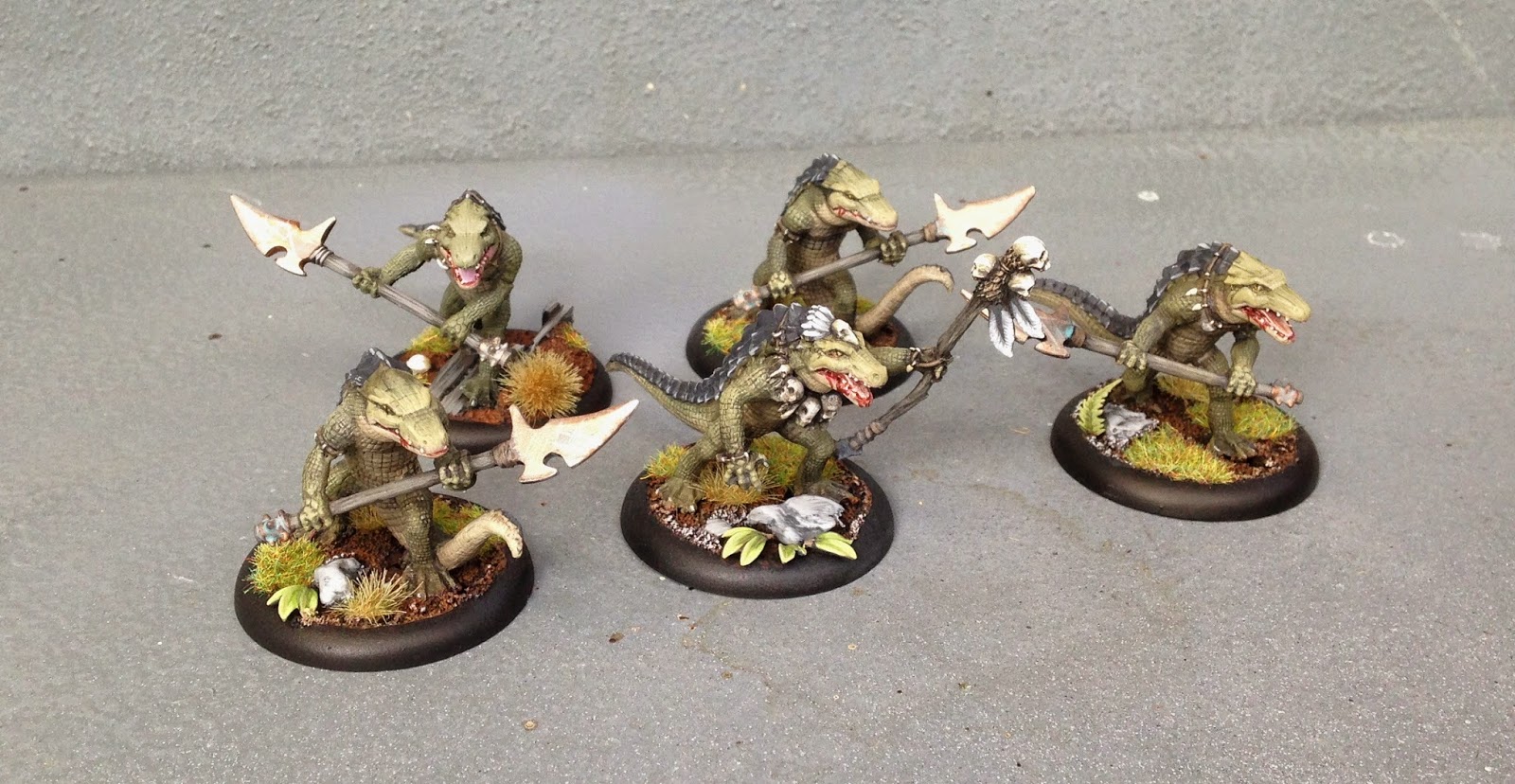 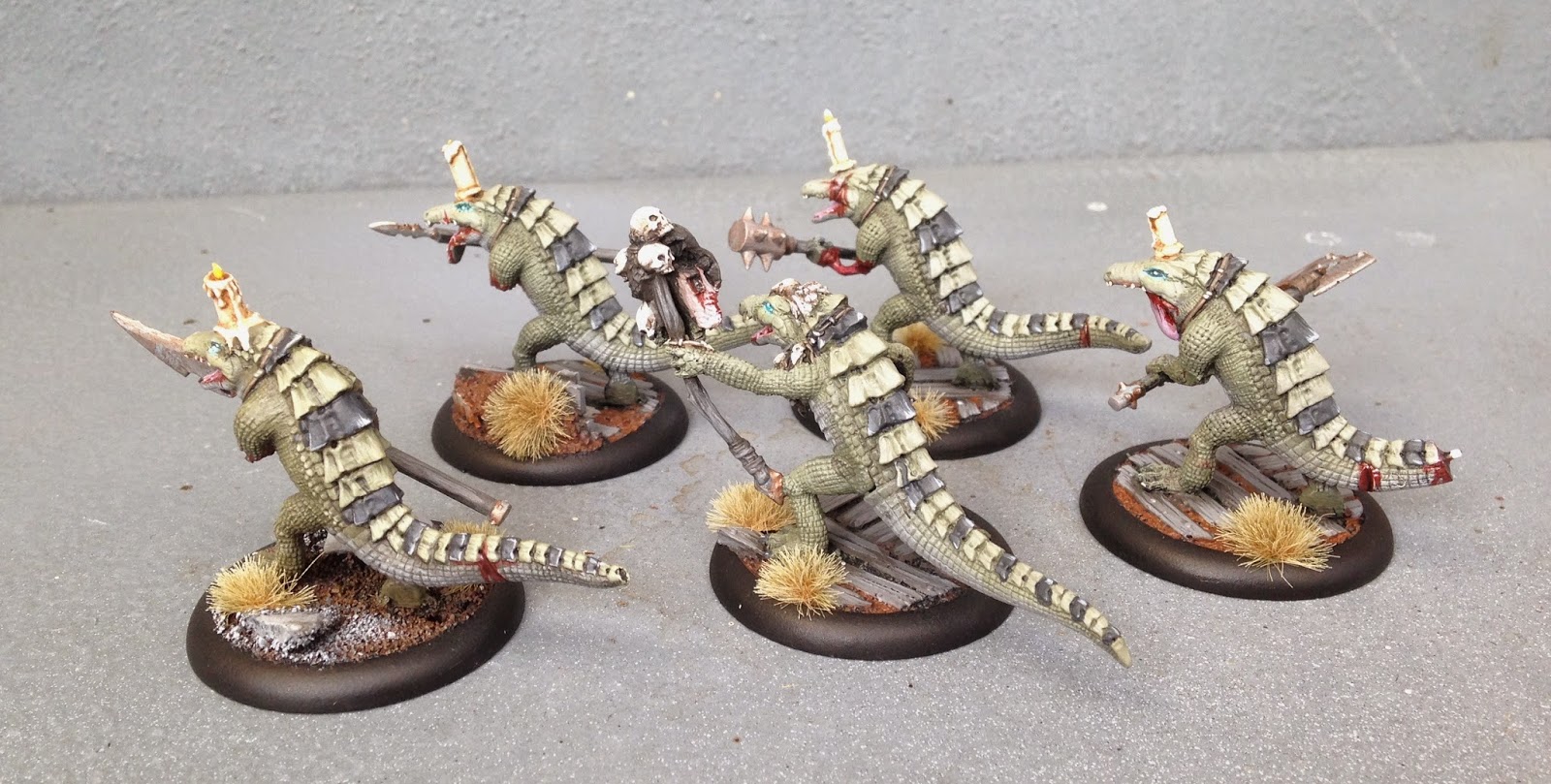