"...with the Markgraf safe in port at Bremerhaven and the Prussian fleet lying low, the Russian Coalition turned their attention to the hated Black Company - mercenaries headed by the traitorous "Black Wolf" Vladimir Nikonov. For many months the Black Company had been operating in the North Sea and though the Russian intelligence initially suspected Prussian involvement, some believed their allies in the Kingdom of Britannia of employing and enabling them.

In the second month of 1874, a White Navy patrol detected anomalous readings in the rocks off the coast of Scotland - Black Company mercenaries! Leading them was the badly damaged Manticore-class Support Skimmer Subjugator - crippled in battle with the Prussian Navy, spewing fire and leaking deadly radiation the ship was a major hazard that had revealed the location of the fleet to the Russian Coalition. A taskforce was hastily assembled to track and intercept them before they reached their hidden base.

Crucially, the readings had also been detected by the Kingdom of Britannia. They despatched their own taskforce to aid the mercenaries amid the rocks. Meeting the Russian fleet, their role in employing the Black Company could no longer be denied and the situation escalated wildly. Shots were fired, and soon both fleets found themselves in a major engagement with their supposed allies..."

The Hunt for the Markgraf (cont.)
Naval Battles of 1874 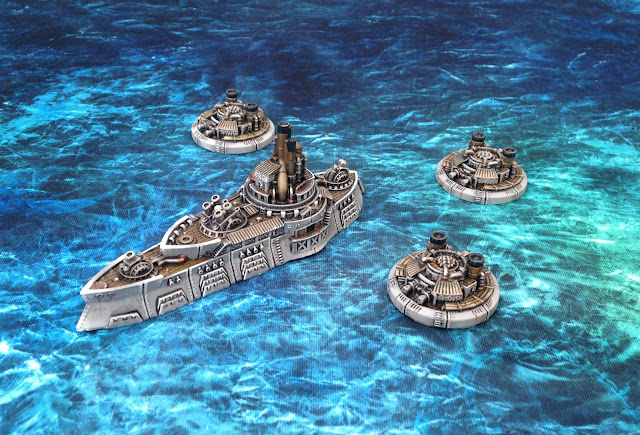 Welcome to another Battle Report from Full Spectrum Dominance, and a return to the North Sea as the Russian Coalition pursue a Black Company flotilla into the guns of the Kingdom of Britannia, represented here by their colonial allies the Royalist Australians. Testing the recently updated Royalist Australians, I would be running a small 1,000pt fleet against Mike with the Russian Coalition; not his usual fleet but something different for us both.

In addition to the different fleets, we would be running a special scenario - one from Drachenfutter's Ironclad Tournament Pack, the Fusion Leak! Details below.
THE SCENARIO
Fusion Leak sees the two fleets meet around a central Objective - in this case, the stricken Manticore-class Support Skimmer . The aim of the game is control the Objective and the area around it - at the end of each turn, each fleet would earn one Scenario Point if they had any ships within 4" of the Objective, and a further point if they controlled the Objective with AP, who had to board the Objective and control it in the manner of a Derelict vessel.

The complication lay in the raging fire and poison leaking from the Objective - at the end of each turn D6-1 Fire tokens would be placed on every ship within 2D6", and then dealt with accordingly. This included aboard the Objective itself, so the Prize crew could be consumed too! The mission was a strange one - in order to win, you would have to endanger your ships, and flood the target with troops - many of whom would be killed by the fire!

Keeping this in mind, we prepared for battle...

CONCLUSIONS AND LEARNING POINTS
A messy defeat for the Russian Coalition! Honestly not my expected result - I really thought the Russians would overpower the Royalist Australians before the game, but as it progressed it became clear they were on the ropes from Turn Two.

A decisive moment in the game would be the loss of the Shashka Squadron so early - the bold attack by the Protector-class Frigates that robbed Mike of one of his premier units. The subsequent damage done in Turn Two left Mike responding to my manoeuvres and allowed me to stay one step ahead.

Mike may not be the most experienced with the Russian Coalition, but after this game I think he has had quite enough. He stated they felt restricted, with some choices clearly better than others (unlike his preferred Prussian Empire), and that his playstyle did not sync with theirs. I have had good luck with the Russians, so cannot completely agree, but concede they are harder than they first appear.

The Khatanga-class Heavy Battleship has never been popular with me, and Mike found it even less impressive. Weak defensive statistics leave it exposed, and the contradictory nature of its weaponry make it feel over-costed. I know a lot of Russian Coalition players swear by it, but I prefer some old fashioned gunnery and boarding parties myself!

Mike's use of the icebergs and the short range of the Russian fleet left them hamstrung in the early moves, allowing the Australians to land some good hits that crippled their Cruiser squadron and smash the Destroyers. It may have preserved the Destroyers for a time, but the Australians still managed to get around that.

On the Australian side, the Shrike Patrol Squadron was nice, but nothing special. Better was the Battleship with attendant Escorts - their impressive broadside power was great, and the amount of ordnance they can throw out was devastating for the Suvorov-class Cruiser squadron.

The new Tender-Cruisers are impressive, and their gunnery is now a real boon to the rest of the fleet. I am happy to pay the premium for these vessels, as they now bring a lot to the fleet.

After some discussion, we agreed the scenario was a little silly for competitive play - the sheer amount of fire hurt both of us and left several ships brutally exposed - crucially destroying the Azov-class Battle Cruiser and leaving the Khatanga-class Heavy Battleship defenceless. Toning down the volatile nature of the Fusion Leak may be the answer here, and I think I would like another match where the scenario was less obtrusive on gameplay to see how the Australians really match the Russians.

Overall, a bloody and brief game, with a strange scenario that caused a lot of trouble for both our fleets. Ultimately I am not sure if it affected the final result of the game in a significant manner, but it certainly makes my initial gaming impressions of the new Royalist Australians rules skewed.


THE NARRATIVE
"The engagement off Scotland was another costly loss for the Russian Coalition, who had stretched their resources to breaking point pursuing the Markgraf. They could ill-afford to chase the Black Company as well, and this incident with their supposed allies was a horrific waste of lives and ships.

Such an incredible act of savagery between allies could not be forgiven or forgotten, but with the World War in full swing, neither could afford to turn on the other. The incident would be quietly ignored, brushed under the rug and not reported to the wider world. Secretly, plans were formed by both sides should the inevitable occur.

Repercussions would have to wait, and any semblance of trust had been sadly lost..."