INTO THE DROPZONE FOR THE SECOND TIME! 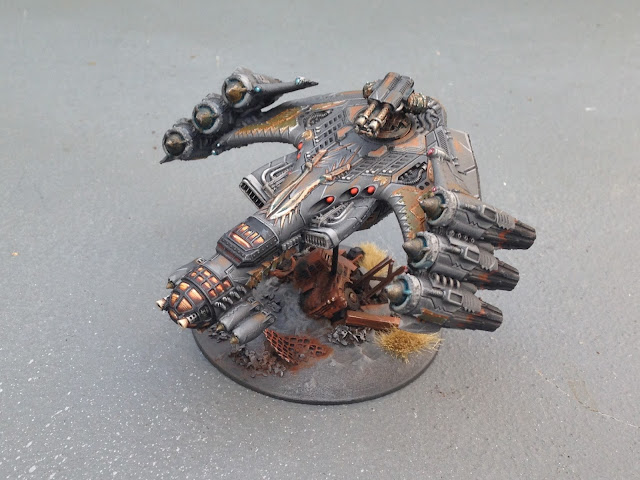 The second round of the Dropzone Commander Escalation League started this week, and with it our merry group of Dropzone Commanders were faced with Targets of Opportunity once more, this time using a 750pt list.

Choosing a 750pt force in Dropzone Commander is a difficult proposition, as there is no way you will get everything you want and may end up with a fairly unbalanced force if you want a specific unit or trick. In my case, I made my list with the mistaken impression I needed to run a Commander, and the correct impression that I had to run the Barrel Bomber (I had just finished Gunarr the Ferryman, and needed to use it in the game to score Hobby Points - thus, I ended up proxy-ing his Lifthawk as a Barrel Bomber).

With this in mind, I decided to run something rather aggressive, with building demolition in mind. Thus, the NT-5 Thunderstorm Custom was the obvious choice! Alongside the Barrel Bomber, no building was safe! The Resistance staple of Gun Wagons in a Kraken and three Resistance Bands in Jacksons carried by a Lifthawk made for a solid core, while the last points went into a CV2 Leader and a small band of Freeriders - everyone's favourite annoying b$£%ards.

Only one source of infantry was a concern (okay, Freeriders at a push, but I prefer not to use them like that), but it was to be a small game so I was happy for the moment. The Thunderstorm Custom and Barrel Bomber would cause havoc on any buildings the enemy occupied, while the infantry poured into the closest - at least this was the plan! Gun Wagons would hunt the opposing dropships, while the Freeriders went tank hunting.
THE PRACTISE GAME
As my "real" game was delayed for work reasons, I had a quick practise game against my old friend Coxer, whose PHR you may have seen on this very blog! He ran a rather nasty PHR list with a Zeus and Odin in a Neptune, two units of Immortals in Triton dropships, a pair of Helios in a Neptune and a pair of Phobos walkers in a Neptune. Lots of AA! Fortunately I was not relying on lots of flyers, but I did not fancy my chances at getting any Objectives off the board.

The game opened well, with our combined firepower bringing down a building while my AA skirted around the flanks and took down both of his Tritons. His Immortals were stranded in the remaining two buildings, one of which was promptly flattened by the Barrel Bomber, Thunderstorm Custom and the valiant sacrifice of the Freeriders.

The game boiled down to the last moment, as my Resistance Fighters gradually dragged down the last of the Immortals in CQB and found the last Objective. A solid 11-9 VICTORY for the Resistance, continuing my streak of never having lost to the PHR! The rest of my force was a mess, with only the Thunderstorm Custom and the Kraken surviving alongside the battered infantry, but I did manage to score 378pts to Adam's 421pts - a close thing!

What did I learn? A Thunderstorm Custom in this size game is a nasty piece of work, and building demolition is the quick way to a low-scoring game! Nonetheless, I am happy with the result and kept the list for the "real" game.
THE GAME
The real match was originally meant to be against a chap named Karl, but his work problems and the resultant delay/cancellation of this game are the reason this blog post is so late. Instead, I was drawn against Chris, local tournament winner and all-around Good Player. His Shaltari had caused me trouble in the past, and though we had drawn I had not beaten him before. Hopefully the smaller size of the game would give me the edge.

The game opened cagily, with the Lifthawk carrying the infantry deftly avoiding the AA cover of the Kukri squadron to pile all three units into the central building. The Thunderstorm Custom and the Barrel Bomber made it their job to bring down the left-most building, while the Gun Wagons concentrated on taking down one of the flying Gates. Left with only one aerial Gate after Turn Two, the Shaltari were forced to deploy all of their infantry into the central building, and a massive close combat ensued.

As the combat raged, the rest of the Resistance leapt onto the opportunity to destroy the ground-based Gates, and then slowly bring down the skimmers. The infantry Lifthawk and the Gun Wagons were lost, but the Thunderstorm Custom and Barrel Bomber mashed the skimmer squadrons while the Kraken Hovercraft, Jackson APCs and Freeriders took down the ground-based Gates. Some well timed Command Cards ensured the combat went the way of the Resistance, and though they lost a huge number of troops, they ended up wiping out the Braves and holding the Objective!

The last couple of turns were a nasty mopping up action, finishing the last skimmers and leaving only the Coyote alive. The Resistance had lost many of their infantry and the Lifthawk that carried them, as well as the Gun Wagons and some Freeriders, but the game ended 11 - 9 on Objective Points and 13 - 7 after adjustment for Kill Point difference. VICTORY!

Chris played as well as usual, and I cannot fault his choices for targeting, but my own target priority was on point, not getting distracted by AA units or Commanders like usual. The Cards played in my favour, improving my own CQB values, while Chris drew the perfect card to win him the game just one turn too late - after the Braves had been killed. The key fifth turn saw a string of bad Passive Countermeasures lose him several major units, while the dogged survival of the Barrel Bomber was nothing short of miraculous! I might try to keep that around for the next game...

THE FUTURE
Painting for the next round will be concentrating on some new units - I think either the Scout ATVs or some Sappers will make an appearance in the 1,000pt list. If I am facing the dreaded Shaltari it will be good to have the Scout ATVs as a way to shut down his AA or his awful Caimans, whichever look the most dangerous! Should I face something more traditional, I might go for more infantry and paint some buses to transport them. Watch this space...