Infinity League - Fifth and Final Round

FOR THE LAST GAME OF THE WINTER LEAGUE, THE TEAM FACES THE COMBINED ARMY 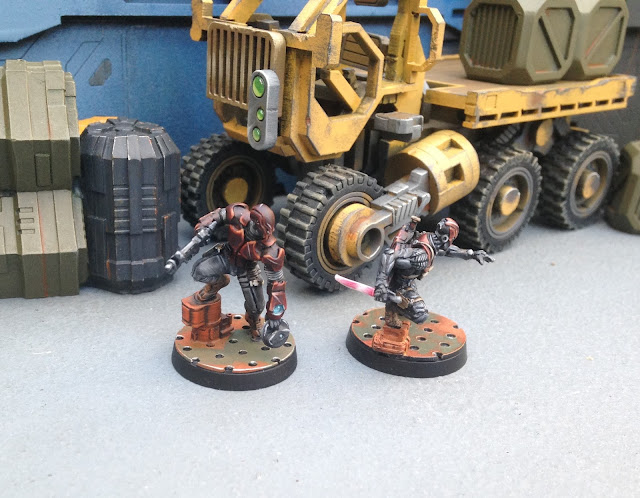 After many, many weeks, the Infinity Winter League has reached its conclusion. Five games played, with a variety of opponents old and new - most of whom were using new Factions to make things interesting. I achieved (spoilers!) a nicely balanced two wins, two losses and a draw - not my finest performance, but given my gradual withdrawal from the Infinity scene and lack of practise, not too disheartening.
THE GAME
The mission was to secure three Antennae with Specialists, and hold them until the end of three turns - simple stuff. My opponent was James for the fifth round, with a nasty new Combined Army led by the monstrous Avatar! I had only faced the Avatar once before and it was a nightmare, killing with impunity and only held back with Smoke Grenades and my troops taking out his Order Pool. My plan for this mission was not much different - kill the Specialists, achieve Objectives and hide from the Avatar.

The game opened as planned, with my troops taking down both of his infiltrating Shrouded Specialists and then gunning down an Ikadron and an Imetron, denying his Order Pool further. The Stempler Zond secured an Objective. Now perilously low on Specialists, James played aggressively with the Avatar and took down my Stempler Zond, Intruder with MULTI Sniper Rifle and Total Reaction Remote, while Hasht (a Shasvastii character) gunned down the Wildcat Engineer.

My counter-attack took down Hasht but cost me the Wildcat with Spitfire, while I was forced to send the Alguacile Forward Observer forward to secure a second Objective. The Wildcats then cut down James' last Specialist, a Kurgat Engineer, and he was forced to use the Avatar to Sepsitorise my Forward Observer!

A bloody firefight in the middle of the board finished the game, as the mind-controlled Alguacile captured an Objective for James and forced me to send the Hacker forward to recapture the central Objective. In turn, the Hacker was Sepsitorised too! The Objective changed hands once more, and the game ended with the Avatar and his new minion surrounded by the battered Nomad survivors.

The game ended with us both controlling one Objective, and the majority of my team lost. The Combined Army had suffered 114pts in casualties, but the Nomads were a mess - 236pts lost to the Avatar and his cohorts! Nonetheless, it was a 3 - 3 DRAW.

James' use of the Sepsitor to capture my Specialists was inspired, and turned the game completely in his favour. I was too slow to use Smoke to stop the Avatar, and losing my dedicated Specialists (rather than the reserve Alguacile Specialists) so early in the game was a real blow. I enjoyed gthe game immensely, and it was good to play something so close after a series of one-sided (for and against me) games.
The League ends there for me, but a few more games are left to be played by the other guys. I will not have the results for a few days, but think it will be a close one! Scoring 41 out of a possible 65 points should see me finish well, but I am unsure if I will manage to break the Top Three.

In the coming future I will be taking a little break from Infinity to concentrate on some other game systems, but this League has been a nice little distraction over the winter months, and I enjoyed painting a handful of new models for the team. Hopefully I will find the time to finish off a few more in the future!