ALEPH OUT IN FORCE 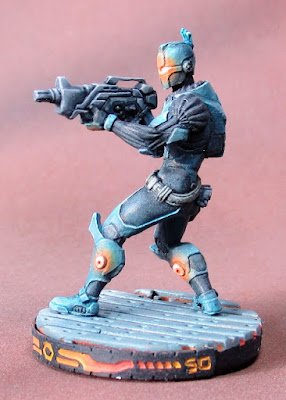 It's been a while since I painted my first batch of Myrmidons and these five miniatures have been patiently waiting for their turn. I was glad I had made a special effort to record the steps I took to paint them, but still it's hard to replicate the exact intensity achieved in the dim a distance past. For these five, the turquoise is a lot stronger than I intended. It doesn't bother me enough to do anything about it, but it is noticeable.

The only model I really wanted done was the Myrmidon Officer, her Chain of Command ability is super useful.  Not only do I not go into the Loss of Lieutenant state when Hector gets blown away, but she can typically push buttons in ITS missions.  The Eclipse grenades are a handy feature too, need something to nullify those pesky Intruders.

A second Chain Rifle is welcome addition, enabling me to get up to some min/maxing shenanigans. Two Chain Rifles in a link team, makes for a headache ARO machine, if they can survive to get into close range.

Standard Combi-rifle dude, a bit meh and will spend most of the time on the sidelines as I will typically choose a Boarding Shotgun over him.

This is the only Myrmidon figure I don't like.  I'm just not into that pose, it kind looks like a the stroke a cricket batsman might make to fend off a bouncer.

Ah, the Spitfire-armed Myrmidon.  He's a beauty alright, both on the board and off.  Model-wise, this fella is slightly bigger than his fellow Myrmidons, the cast was also, just a touch cleaner than the others.  On the board, a Spitfire is just a beautiful thing, especially in a link team.  Quite a lot of points though, so he'll only come out to play when Hector gets sidelined.

Getting these five done represents a big milestone in project ALEPH, paving the way for me to move onto something a bit different for a change.  George's cowboys have caught my eye and I may have just bought a copy of Dead Man's Hand, so expect some more owboy flavoured goodness soon.