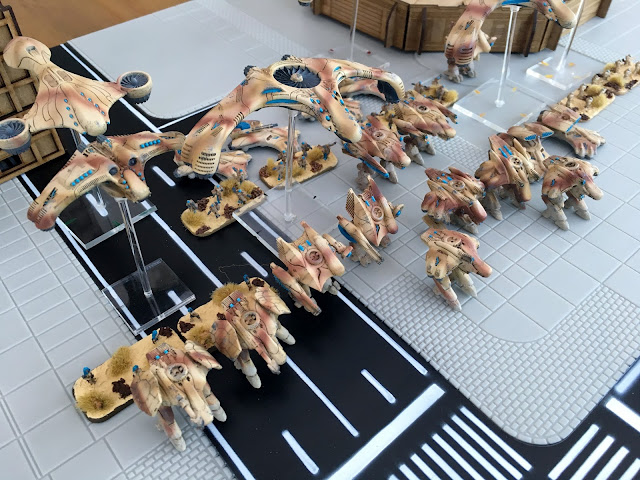 So it's been some time since I last wrote an article, but with Coastal Assault over (and an improbable third place) I'm looking to Reading Warfare and thinking about a list. I wanted to really critically examine what not only underpinned the PHR strengths, but also what I want in a list (and also enjoy pictures of what I've worked on!)

What does PHR do well?
Resilience (most things have 2DP and decent armour)
Anti-Air firepower as a core choice
Energy 11 weaponry as a core choice
Good Command Cards
Balance - tools for any and all jobs

What do I need in a list?
Anti-Air - at least five units
Mobility for Critical Locations/Focal Points and threatening the backboard
Demolition for Objective missions
Infantry for searching
Resilience

The other thing to consider to this is the way that I like to play - I've played many different systems - and I like to play aggressively, either with tactics or units - I want to make sure that my opponent can't rest when we play (Editor's note - this is undoubtedly true... it may be fun but playing Adam is not relaxing!).

There's also the experience of using PHR so far - and what's worked well - this always with the caveat that I don't get exposure down here to Shaltari and Scourge, a deficit in my tactical knowledge.

So let's build a list - in some ways it's best to start with the AA. For me, I like a pair of Phobos in a Neptune, they're tough, provide great coverage, and do the job! Alongside this I like a walk-on Phobos, this works well due to their long range, and means in most missions whilst they won't score, they are useful. Finally I like a pair of Helios, they have shorter range, but I find essential for dealing with Gunships where the multiple shots versus Evasion is a better use than the Phobos. That is also handily two of my six Battle Groups. 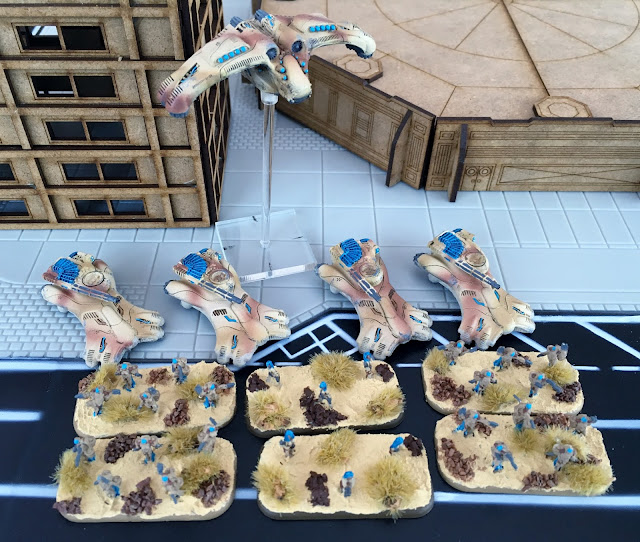 One of the most effective infantry units are the Valkyries - mobile without its transport and they can search and do a little CQB too! I've really enjoyed partnering them with Angelos, they are cheap yet effective and ruin buildings.

The other bit I like with the above combination is having two infantry in one Battle Group, meaning that you can keep them safer than having infantry across multiple Battle Groups. But you do need four infantry groups! As such I like having two Battle Groups with two infantry. So step up the Longreach - I love these chaps, they can do a little building demo, and enmasse hurt vehicles - they are worth the twelve points on regular infantry. 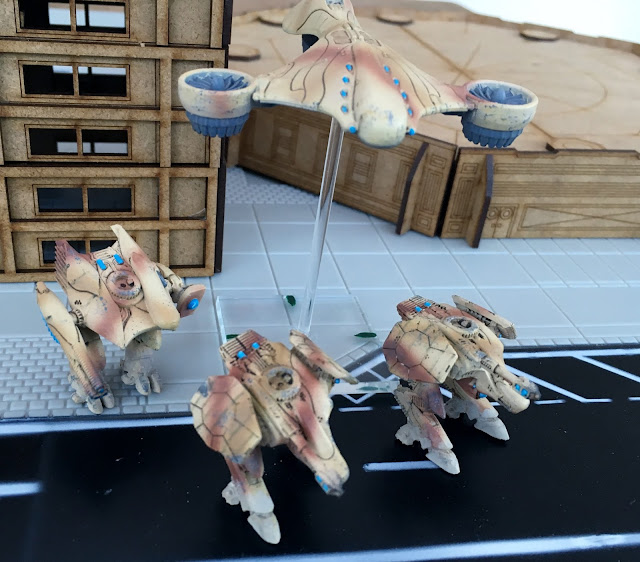 Next unit is my hands-down favourite - the Erebos. It works well to disrupt your opponents, the sheer annoyance is always worth it! I like the B and upgrade to the A if I have ten spare points. 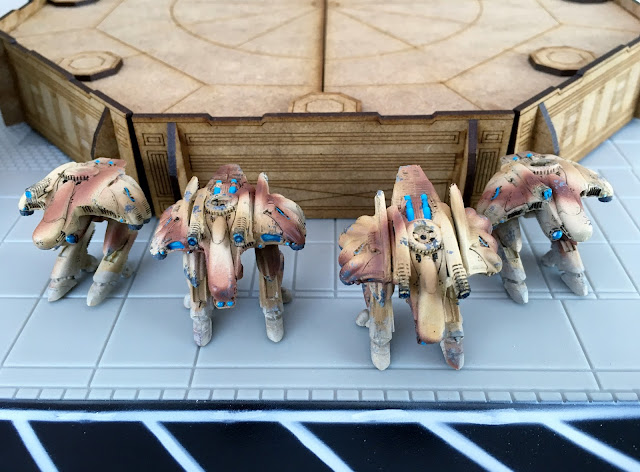 Now the interesting decision now is mobility versus resilience. I like having mobility in my command area, this allows me to redeploy a lot of points for Table Quarters/Focal Points etc. I think the Hera works well, and I think the minimum effective squad is two Hera's. two Apollo's. The six E10 shots is dangerous on the move! Finally I take an Level 3 Commander, whilst I prefer Level 4, points just don't allow it. 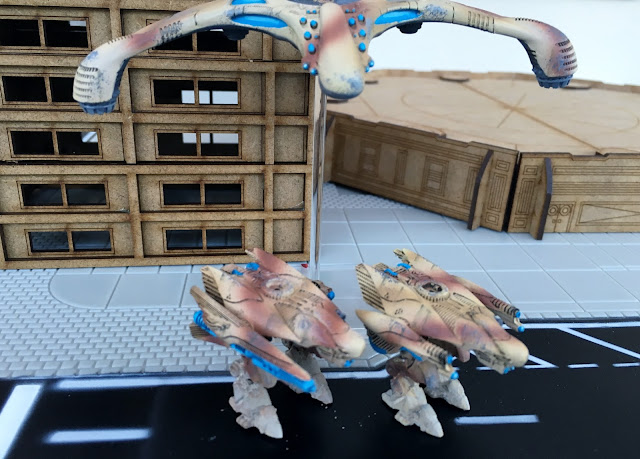 Finally I want to take advantage of the E11 and the resilience - this leads me to the Odin. Now I still feel conflicted about the Odin, at Coastal Assault and at Cardiff Call To Arms I took a pair and they often didn't kill lots, but people avoided their kill zone, and sitting them on a Critical Location works well. I will admit though that part of me does consider swapping the Hera squad to Odin/Zeus and taking some Thor's and a quad of Apollo's. 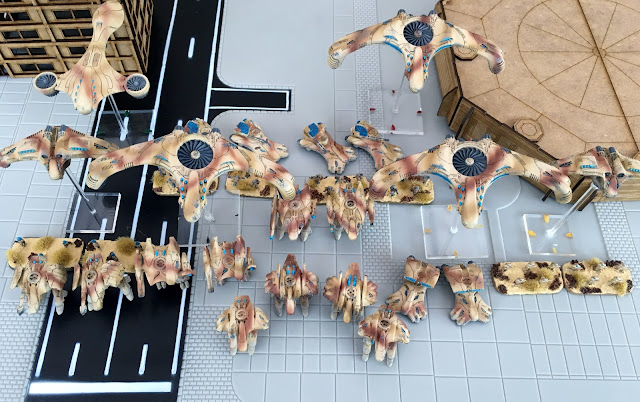 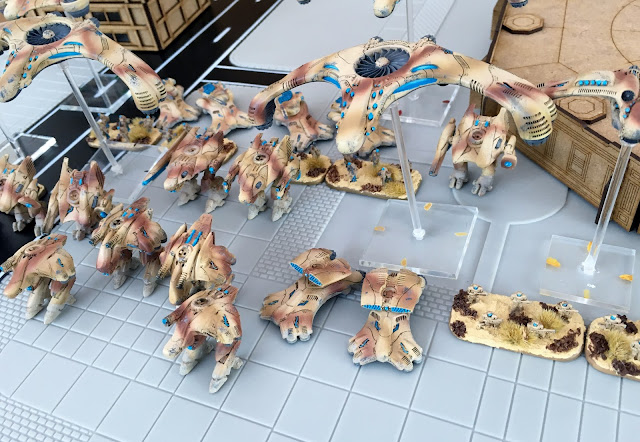 Now this was the end of the article, but I played a couple of practice games and realised I was missing an element- CQB, previously I had used Menchit A2's lots, and that flame threat kept people being reluctant to enter buildings. Now I just found that I couldn't drop in some Menchits - not enough points. But the alternative is Sirens, I realised though that dropping Longreach to Immortals left me four points short. The only way to do this I felt was to drop an Odin to a Hyperion - so off to the shop I scarpered! So this is the final list - wish me luck! 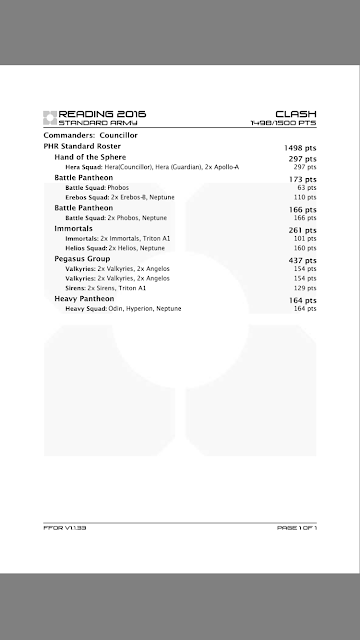