"In the early months of 1873, the Chinese Federation continued their annexation of the South China Sea and began to look further afield - if they could put the pressure on their enemies in the Timor Sea, Indian Ocean and Pacific, they could stifle any attempts at counter-attack before it began. One of their first actions targeted the coast of Western Australia - Britannian territory.

The response of the Australian fleet was swift - the Seventh Battle Group had recently been patrolling the area, and moved quickly to intercept. Reinforced with additional support aircraft and escorting a bulky Titan-class Troop Transport, the hoped they could turn aside the Chinese aggressors before they came within range to bombard Australian territory.

They met the enemy fleet near the headland of the Dampier Peninsula, emerging from the rocks to engage at close range. This bold attack would surely cost them dearly, but it was hoped the power of Britannian gunnery would smash them aside quickly..."
- The Cauldron: War in the South China Sea
Naval Battles of 1873 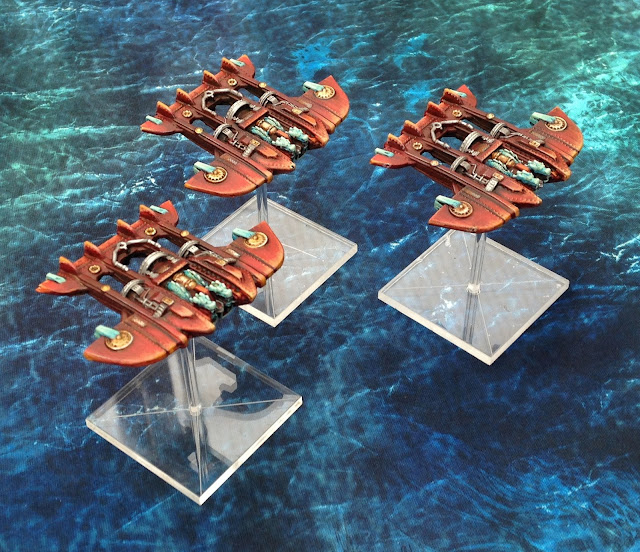 Welcome to another Battle Report from Full Spectrum Dominance, and a return for the Chinese Federation and the Royalist Australians. After many months of North Sea action with the Russian Coalition and the Prussian Empire, I thought we should turn our attention to the East, and bring back some of the less conventional fleets in the roster.

Returning from a long exile, my Good Friend Ben would be running his Chinese fleet, demanding to use the new Assault Flyers and everyone's favourite Armoured Dragon Robot. In turn I would be running my favourite Australians, with some Operational Assets to bring them up to 1,500pts.

The game was simple, played over a slightly smaller board than usual as we were using the lovely cloth mat from Dreadfleet. Drawing Secret Objectives, Ben and the Chinese Federation were tasked with scoring at least 750 Victory Points and destroying or capturing the Australian Commodore's vessel. In turn, I drew to destroy all of Ben's Medium squadrons, but given how many he had chosen I dropped this objective in favour of scoring at least 1,050 Victory Points.

The board was set with a few rock formations, one dominating the Chinese starboard flank while another sitting in the Australian starboard. The Australian fleet would be forced to go down the central channel or risk splitting up, while the Chinese flyers could take advantage.
THE FLEETS
Chinese Federation
One Jian Mk.II-class Battleship

This fleet was dictated by running the new Chi Long-class Assault Flyers and the desire to use the Armoured Dragon Robot, one of our favourite models in the entire system. The rest of the naval fleet was fairly standard - Cruisers and the Mk.II Battleship for boarding, while three Support Carriers would bring enough Support Aircraft to drown the Australian fleet.

No frills, this is all the Australian ships I have painted, including the Forbes-class Support Blimp which was painted in Australian colours to proxy the Osprey-class War Rotor - a model I really dislike. I ran the Apollo-class Support Carriers and the Titan-class Troop Transport as I needed to bulk up the points, and they are also good alongside the rest of the fleet - the extra squadrons of Support Aircraft will help against the Chinese flyers, and the Troop Transport might help the Cerberus-class Battleships in counter-boarding. Hopefully it won't come to that, and I can blow them out of the sky and water quickly!


CONCLUSIONS AND LEARNING POINTS
As usual, this was a fun game with a lot of damage done to both sides and a horrendous number of tokens put down (flamethrowers!). We had a nice mixture of ordnance damage and boarding, robot attacks from the Dragon and dive bomber attacks.

Looking over the final positions of the ships looks like a fairly dull game, but it was exciting at the time. Nonetheless, I recognise the need to make these games a little more interesting tactically, and am thinking to introduce new scenarios and more interesting deployments in the future.

The Chinese Federation were on point as usual, though Ben is a little out of practice with them. He was very happy with both squadrons of flyers, though the Dragon was a little slow and could only rip apart one target in combat.

The waves of Chinese Support Aircraft caused a lot of trouble, as usual, but the majority were cut down by the Australian wings quite early in the game. Only a few made it through, destroying a Tasmania-class Submarine-Tender and damaging the Commodore's Battleship. Had I not run the Apollo-class Support Carriers I would have been totally overwhelmed.

The "new" updates to the Australian fleet make the Submarine-Tenders feel a lot better, but the War Rotor was fairly underwhelming. This being one of the first times I have used it, I feel I need a little more practice.

I am criminally bad at using the Combat Coordinator MAR in conjunction with the Crocodile-class Assault Submarines - this needs to change if they are to make a big impact in the future!

Since this battle was played, updates to the Operational Assets have made them all cheaper - very nice indeed!


THE NARRATIVE
"The attack of the East Sea Battle Fleet was largely inconclusive, leaving the Australian defenders battered but unbowed. Disrupted by the loss of their Commodore, their response to the attack was muted, an the majority of the Chinese vessels managed to withdraw without suffering further.

This bold attack was one of the first major assault beyond the South China Sea, and had attacked Britannian vessels within their own territorial waters. The Admiralty was greatly alarmed with this development, and began considering their response - but would they react in time?"