AAR - Clash Of The Titans

"The walls of Bremerhaven lay in ruin, and the full force of the White Banner Northern Fleet descended into Prussian waters. Enraged by the maddening search for the Markgraf and the losses they had suffered, the Russian Admiralty committed the full weight of their North Sea assets into the attack - the twin kingships of Monarkh Squadron and the immense Petrushka.

Against them stood Baron Karl-Ehrhart Grunner and the Markgraf, his own flagship Grendel and the Sachsen, recovered from Greenland as the winter ice thawed. The Teutonic Order also committed their grand Hochmeister-class Dreadnought-Robot Carolus Rex, only recently repaired and refitted following battle at Midbrødøya.

Such a commitment of tonnage and ordnance was unheard of, and grossly foolhardy - truly, two of the Great Nations of the world had been driven insane by their mutual antagonism, and their folly would see the deaths of thousands upon thousands of men. In the hunt for one vessel, the Russian Coalition had sacrificed entire fleets, and in their pride the Prussian Empire had crippled their North Sea operations - and impacted those beyond it.

Here, at the walls of Bremerhaven, there would be a reckoning - not just for the Markgraf, but for the entire World War..." 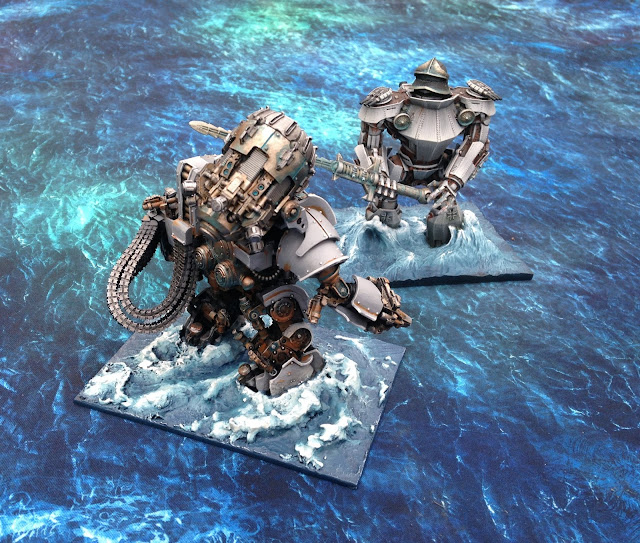 Welcome to another Battle Report from Full Spectrum Dominance, and the final (?) episode of the epic Hunt for the Markgraf campaign. Nearly eighteen months in the making, this narrative campaign has seen Mike and I play a huge number of games using all sorts of scenarios and new models, involving not just the Prussian Empire and the Russian Coalition but the Federated States of America, Kingdom of Denmark, Black Wolf Mercenaries, Kingdom of Britannia, Britannian Raj and Royalist Australians.

After so many games, I thought it was time that dastardly Dreadnought was finally caught. The way our games had gone, and the narrative progressed, the Russian Coalition was not going to catch her in open water, or trick her into some Saw-like deathtrap - they would attack it in port, with the biggest fleet I have ever mustered, in the least subtle way possible!

The mission was simple - smash each other until we get bored. The board would be set as the harbour of Bremerhaven, but relatively open to facilitate several thousand points worth of models clashing. Adding up everything I wanted to run, we landed at roughly 3,200pts per side - though most of these points were tied up in Dreadnought-Robots, entire squadrons of Battleships and five (!) Dreadnoughts. Running the Russians, I decided not to run any Carriers, but awarded the fleet an extra two squadrons of Fighter Planes to represent the massive logistical support behind the Russian attack.

The only special rules beyond all this were the Russian Commodore would be housed on the Petrushka, and the Markgraf would be worth double Victory Points for any damage suffered - if I could Prize it, I would earn a whopping 1,060 Victory Points!

This fleet was heavily influenced by the scenario - I knew I would be running the paired Dreadnoughts and squadron of Battleships (not actually being run as a squadron, I must comment!), and the Petrushka, and unsurprisingly this did not leave me a huge amount of points!

I chose the three Battle Cruisers for looks alone (including my favourite Rogatina Squadron), the Tunguska-class Large Skyship to deal with any potential Prussian flyers. The Repair Cruisers would keep the big guys in the fight, as I was sick of losing the Petrushka. The Tambov-class Gunships were chosen to smash the Prussian Dreadnought-Robot, and the small squadrons were just standard choices for me. Lacking Fleet Carriers, we ruled that the fleet would have expanded Local Air Support to show the support of the carriers beyond the battlefield - I went for four squadron of Fighter Planes to deny the Prussian squadrons, and hunt down any rogue Donner Squadron.

One Konigsberg-class Battlecruiser with Aggressive Crew
One Squadron of three Donnerfaust-class Support Cruisers and one Havel-class Light Carrier, carrying one wing of four Dive Bombers

By the end of four turns, the Prussian Empire had scored an impressive 2,340 Victory Points, yet in turn they had lost a mighty 3,113 Victory Points. Ouch! An incredibly bloody game! VICTORY FOR THE RUSSIAN COALITION!

For all their success, the Markgraf still escaped their wrath...

What an absolute mess of a game! Four Dreadnoughts, three Battleships and a Dreadnought-Robot destroyed - a total of nearly 5,500pts worth of vessels left burning or sinking by the end. Was it everything we hoped for? There were certainly a few very satisfying moments in the game, but ultimately the Markgraf escaped once again - this ship is blessed or cursed, I have no doubt.

To be honest, after the initial volley I did not concentrate on the Markgraf anywhere near enough - during the Second Turn it was suffering a Weapons Damage critical effect and I had better targets, while the Third Turn it was protected by the other two Dreadnoughts. After that, it was too late, and the Prussians had done a good job in clearing out that side of the battlefield.

The Prussians lost the battle in the centre, where their own Dreadnought-Robot and the Elbe-class Fleet Carrier were scrapped, and later both of the Kaiser Karl-class Heavy Battleships were destroyed by the Petrushka in two quick Activations.

I was worried that the game would take too long, but it was quickly apparent that both sides were very efficient at blowing each other apart, and as we can see not much survived! The game itself lasted just over three hours, very good time for the points. We did help each other by playing forces with a big percentage of Large vessels - perhaps with 3,000pts of Small Squadrons or more Carriers we would have struggled to finish so quickly.

I was also worried that we would struggle to destroy one another's Dreadnoughts once we started taking damage, but it turned out okay - we had a nice mixture of vessels' dragged down over several Turns, and those destroyed quickly (mostly due to the Petrushka, it must be said!). The Large vessels dominated the game, of course they did, but they were almost all destroyed by the end.

The Dreadnought-Robots did not feel overwhelming at this size of game - if anything the Hochmeister-class Dreadnought-Robot was rather underwhelming. The Petrushka did score significant kills, but only really came into play in the last moments of the game, after most of the Prussian fleet had been destroyed. Wrecking two Kaiser Karl-class Heavy Battleships felt really good - I doubt Mike will let an undamaged Svarog-class Dreadnought-Robot so close in the future!

Ultimately the game came down to Activation Order - the Third Turn and the sacrifice of the Moskva-class Dreadnought to cripple the Blucher-class Dreadnought and render the Elbe-class Fleet Carrier Derelict was a real game-changer, where I had been tempted to finish off the Hochmeister first. In the end, I would have lost a great deal more than one or two Tambov-class Gunships if the Dreadnoughts had been able to activate first, and I think this decision won me the game.

Terrain played a role, of course. The walls forced the fleets to split and close, where the brawlers of the Russian Coalition would have a slight advantage. I maintain it would not be a huge advantage, but nonetheless they won out as Mike committed so many of his big guns to the port-side flank. The side with the Markgraf and the pair of Blucher-class Dreadnoughts held for a while and did well to smash the Battle Cruisers and Shashka Squadron, who collapsed in the Third Turn alongside the Moskva-class Dreadnought and the Borodino-class Battleship. It was only the timely intervention of the Tunguska-class Skyship that helped drag down the Dreadnoughts in the later stages of the game.

It is difficult to nominate a Unit of the Match in a game this size, but I think the Tunguska-class Skyship and the Petrushka both scored some really important kills that made sure I held the advantage. As mentioned before, the sacrifice of the Moskva-class Dreadnought was really important to rob the Prussians of their aerial and electrical power at the crucial start of Turn Three.

On the Prussian side, I can't say anything leapt out at me. The pair of Blucher-class Dreadnoughts took on a huge number of Russian ships, and would have won had I not committed even more vessels to deal with them. Sadly, the Markgraf did not get to make much of an impression, but this allowed it to survive and escape!

So there we are, a rather explosive end to a long campaign. I will be writing a fuller conclusion for the whole campaign in the future, but for now, Markgraf remains at large, roaming the high seas. Will the Russians ever catch their grey and black-striped nemesis? Not today, and not for a while, as our attention turns to warmer waters...

"The Russian Coalition scored a decisive but bloody victory at Bremerhaven, smashing the Prussian fleet within the walls of the harbour itself and bombarding the once-proud city. Only the arrival of aerial support some hours later would halt the Russian attack, but by then the city was aflame.

The Russian show of overwhelming force may have badly extended their supply lines and pulled dozens of their ships out of position, but the Prussian operations in the North Sea had suffered a blow they would struggle to recover from. The Markgraf had drawn the hammer of the White Navy upon Bremerhaven - for all their losses in the months past, the Russian Coalition had endured and answered in the only language they understood - unstoppable, inordinate violence.

Of the Markgraf itself, few had any answers - once more that damned vessel had escaped into the open ocean. Baron Karl-Ehrhart Grunner was a marked man - any accolades from his past exploits had been forever tarnished by his defeat at Bremerhaven, and few among the Prussian High Command wanted anything more to do with that cursed vessel - better for it to sink below the waves and be forgotten, than draw the ire of the Russian Coalition once more.

The Prussian Iron Fleets would resume their operations soon enough, out of Kiel and other major ports, but Bremerhaven was lost. Their strength spent, the White Banner Northern Fleet withdrew into the North Sea. The War continued, and for a time at least, eyes turned to other areas of the world, and forgot the name Markgraf..."